SAFETY IN THE TRANSPORTATION
RAVAS-SAFELOAD

Calculate with the weight, the central loading point and the incline of the mast, to know if a load is lifted safely. 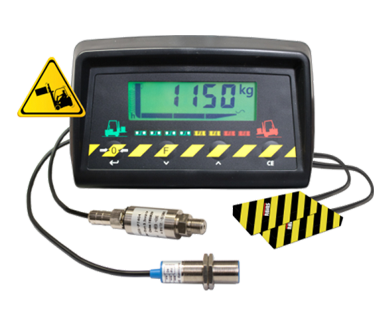 RAVAS-SafeLoad is an aftermarket product for counterbalanced forklifts that provides both a weight indication and stability information in a single combined display.

The RAVAS-SafeLoad uses information from a hydraulic sensor and a set of sensors that measures the moment forces from load center position and mast tilt, to present stability information in the display. A LED bar below the weight display goes from green (safe lifting), via yellow, to red (unsafe lifting: risk of tipping over). The led bar stability indication is enhanced by the color of the weight display (green backlight in safe situations, red backlight in unsafe situations), and by a fork in the weight display that is divided in three segments, one of them blinking to indicate the load center position on the forks.

It acts as an active load diagram: it calculates with weight, load center point and mast tilt, in order to decide whether a load is being lifted safely.

An example: on a 2.5 Ton lift truck a load of 1.853 kg picked up close to the carriage plate might result in a weight indication of 1.850 kg in the display, against a green background, with the middle fork segment blinking for a load center point at 500-600mm, and four green LEDs lit up on the LED bar. However, the same load picked up at the fork tips will result in the same 1.850 kg in the display, but against a red background for unsafe lifting, with the right side fork segment blinking (LCP at 800 – 1.000 mm), the red segments on the LED bar lit up, and a warning buzzer going off.